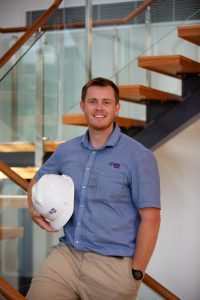 Daniel King commenced work with Graph in February 2015, when he was still an undergraduate. His undergraduate studies were initially undertaken on a full-time basis on the Callaghan campus, but his final year was completed part-time so that he could obtain industry experience with Graph. During this final year, Daniel was employed as a labourer/first aid officer, gaining “hands-on” experience on a project involving a major refurbishment of a licenced club, Wests Cardiff ($11.8m).

In 2016, Daniel moved into the role of Contract Administrator, where he assisted Graph’s Project Managers in the administration of a wide range of projects, including the refurbishment of Wests City ($11.0m), a substantial upgrade of The Anchorage, Port Stephens ($8.0m), a new high-end residence at Corlette ($3.5m), Riverlink Maitland ($4.0m) and Shortland Waters Golf Club ($7.3m).

Daniel subsequently moved into managing his own projects and, early in 2019, was appointed to the position of Project Manager. He has completed a number of refurbishment projects for Belmont 16s (a licenced club on the shores of Lake Macquarie), a Newcastle CBD fitout for Scenic and, in late 2019, will complete Stages 5 and 6 of Jewells Lifestyle Community, for Adventist Senior Living, a $5.2m contract involving nineteen independent living units.