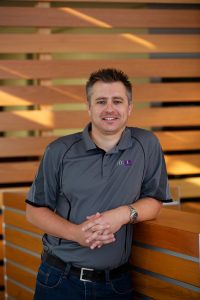 Dean Lawrence commenced employment with Graph early in 2010, when he took up the position of Estimator. At the time, it was a new position, established to expand our estimating capability under the watchful eye of the widely experienced, and well respected, Company Estimator. The expansion was not only directed at winning more work, but it also reflected the growing complexity of the estimating process, where an ever-increasing level of documentation needs to be addressed during a tender period.

Prior to joining Graph, Dean had worked with another local builder as a Project Manager, where he obtained a good grounding in the local building industry. In particular, he developed an excellent appreciation of the structure of the building industry, where subcontractors undertake the physical work, making good relationships with good subcontractors a fundamental requirement for a successful building business.

Dean readily adapted to the role of Estimator, and to Graph’s approach of carefully evaluating all trade quotes received, and not just selecting the lowest for each trade and “adding them up”. With the conflicting objectives of being both competitive and profitable, the Estimator’s role is a highly responsible one. Dean has been very successful in winning projects by competitive tender but, when clients have appreciated the benefits of a higher level of involvement from Graph, Dean has also provided budgets from concept/feasibility stage through to DA/CC, then to final tender. Of recent times, Dean has been appointed to the position of Company Estimator in recognition of his outstanding skills and abilities as an estimator.