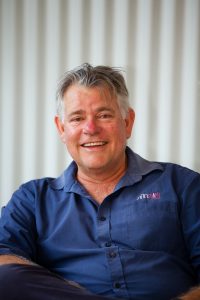 John was born and bred in Newcastle and began working in the construction industry in 1983 as a first-year apprentice Carpenter/Joiner with Belmont based D F McCloy Pty Ltd.  John completed his trade course and his Clerk of Works Certificate over the next six years.

John’s leadership and management ability were recognised very early in his career when, as a fourth-year apprentice, he was appointed to the position of Site Manager.  His early experience in that role was predominately in the construction of medium density housing, which is an ideal form of construction to learn and hone one’s skills in sequencing and quality control.  Over the fifteen years that John spent in the role of Site Manager, his experience extended into a wide range of projects, including schools, aged care facilities, commercial projects, hospitality and club projects.

When McCloys sold the building business in 1999, John came across to Graph. In 2002, he was appointed to a Project Manager position in Graph Building, in which role he managed a similar range of projects.  Many of them are landmark projects within Newcastle and the Hunter Region, which have won prestigious MBA Awards for Excellence in Construction.

However, most of John’s experience as a Project Manager has been in clubs and hotels, where he has delivered an impressive list of projects to a number of clients but, in particular, Wests Group Australia.  Many of his projects have been refurbishments, carried out in facilities which have continued to operate throughout the course of the work.  Although John has been in a management role for many years, it remains that his trade background, coupled with his attention to detail, has equipped him to provide practical and cost-effective solutions to issues which inevitably arise in the course of renovation and refurbishment projects.

In 2017, John took on the role of Construction Manager at Graph, which allows his skills and expertise to benefit Graph’s projects generally.